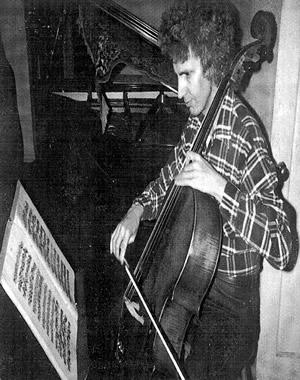 (Following is an excerpt from his obituary)

Mr. Tonsing was raised in Topeka, Kansas, graduating from Topeka High School in 1957. He entered Kansas University, Lawrence, Kansas, to study music with the well-known cellist, Raymond Stuhl. After earning his Bachelor’s and Master’s Degrees in cello performance at Kansas University, he taught Music Theory and Composition, as well as cello, and conducted the orchestra at Amarillo College, Amarillo, Texas, and then went to Oklahoma State University, Stillwater, Oklahoma, where he was professor of cello, string base, as well as music theory and composition.

A prolific composer, he created over 400 pieces for solo and combinations of instruments and voices, including the music for Felice, a short film that won the 1972 Oklahoma State University Film Festival Award, for Deportee, the 1976 short film, and for Cradle Song, the 1981 dramatic short film. Many of his students have gone on to become recognized composers and performers in their own right.

A pioneer in the use of synthesizers, he also performed for a while in rock bands. His most well-known composition was brought about by a home robbery in which his house was stripped of its furnishings, leaving only the grand piano and a small to piano. He wrote a concerto for piano and to piano which he performed often. He received the Distinguished Service Award for Programming for the National Public Radio series of programs on world music called, “What in the World,” from DOSU-FM in Stillwater.

He was an enthusiastic teacher, and in his classes on world music, he brought to his students all sorts of exotic instruments to demonstrate, from Australian didgeridoos to Peruvian pan pipes. In addition, he began to collect early recordings of this music, especially of various Native American tribes. Present during the 1998 homecoming of the Pawnee Nation at the headquarters in Pawnee, Oklahoma, Tonsing heard the lament that the language and music of the early members of the tribe had been lost. Tonsing then revealed that on the contrary, he had many recordings that contained these, and he made an offer to copy these recordings and to distribute them to anyone who wanted them.  Finding more recordings of Pawnee music made between 1890 and the 1930s at the Indiana University “Archive of Traditional Music,” he made copies of these, too, and passed hundreds of the tapes to tribal members.

Finding that only a few native Pawnee speakers were alive, he made recordings of them to preserve the language. He also persuaded one of the Pawnee elders to hold classes in the language. Through Professor Evan Tonsing’s efforts, a great Native American cultural heritage has been preserved.

I am trying to store as many of Tonsing's compositions as possible on IMSLP: https://imslp.org/wiki/Category:Tonsing,_Evan_Alva